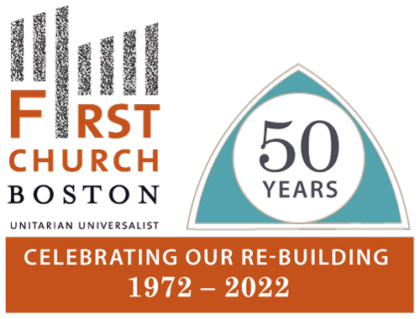 First Church in Boston celebrated the 50th anniversary of its boldly modern, rebuilt structure April 30 – May 1, 2022
A devastating fire in 1968 burned the century-old church to ash, except for the Gothic façade and bell tower. The congregation chose to rebuild, commissioning Paul Rudolph to create a design that gave versatility to the spaces of the new church. Today First Church Boston has the distinction of being the oldest church in Boston (1630) with the newest building (1972).
A weekend of free events celebrated the rebuilding. The Festival Concert on April 30 was inspiring and joyful. The Architectural Panel May 1 brought together esteemed architects and architectural historians to talk about Paul Rudolph and First Church Boston’s design. Guided tours of the church were offered April 30 and May 1

This inspiring program was a journey through music, narration, and dramatic slide projections as it made emotional commentary on the pivotal historical events of the First Church in Boston, and included a pre-concert reception.

*This concert is presented in part with grants from the Music Pension Trust Fund and the Collins Memorial Fund.

Hour long guided tours explored the compelling spaces Paul Rudolph designed for First Church—from the outside amphitheater to the highest balcony of the sanctuary. Guides highlighted how the architect’s design responded to the congregation’s goals. They shared quotations from archived letters in which Rudolph explains his thinking on the use of the ruins, the importance of light, and the value of rooms without square corners!

The sermon ‘Risen from the Ashes’ by Rev. Edmund Robinson told the story of how the congregation decided to rebuild the church and why they chose a controversial modern design. Special musical selections were included for the occasion.

There was a lively, well-attended panel discussion about the work of Paul Rudolph and his groundbreaking building for First Church. The program included an interview with Robert Campbell, the architectural critic for the Boston Globe, by artist and author Justin Beal.