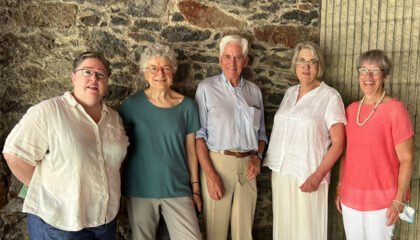 The Standing Committee is delighted to announce the Ministerial Search Committee (MSC) who will lead First Church Boston’s search for our next Senior Minister. The MSC will be spending the summer organizing their work for fall and winter, planning multiple ways of gathering input from the congregation as well as becoming acquainted with UUA staff who will be consulting with them to support the search.

Barbara Martin (Chair): Barbara grew up in the Tennessee Valley Unitarian Universalist Church of Knoxville, Tennessee, a strong source of community, social justice action, and spiritual inquiry for her family. As a relatively recent member of First Church Boston, she has been active on the Social Justice Committee and helped lead the Common Read discussion earlier this year, as well as organizing the building tours during the 50th anniversary celebration of our re-building in April. Barbara retired in 2019 as Alfond Curator of Education at the Museum of Fine Arts, Boston, after forty years in varied roles within the education department. A resident of Central Square in Cambridge, she serves on the program committee of History Cambridge, and is an enthusiastic consumer of the theater, music, and architectural streetscape of Greater Boston.

Beth Curran: A member since 2015, Beth Curran has served on the Worship and Standing Committees,chaired the Membership and multiple Intern committees, and been a summer lay preacher.   She coordinated an update to the church brochure, and spearheaded what is now a regular calendar of potlucks.  Beth lives in Jamaica Plain and is a senior financial administrator at an investment management company downtown.  She is/has been active in several local arts organizations, including the Chlotrudis Society for Independent Film, Fresh Ink Theater, the Footlight Club, the Independent Film Festival of Boston and Grub Street Writers.  Beth has a Masters of Divinity in Feminist Liberation Theology, and was an original member of GLIB – Irish American Gay, Lesbian and Bisexual Group of Boston, the first queer group to march in the South Boston St. Patrick’s Day / Evacuation Day Parade, in 1992.

John Benson: A member of First Church Boston since 2001 and, before that, of First Parish in Ithaca, NY, John has been active on many FCB committees. He is now serving as one of First Church’s five Trustees and will take a leave of absence from those duties during the lifetime of the MSC. He is a recently retired architect and worked with Barbara Martin and others on FCB’s 50th anniversary celebration of its Paul Rudolph building this spring. He is also a former chair of FCB’s Standing Committee and active in the Social Justice Committee and its numerous activities, as well as serving on several FCB Intern Committees in recent years.  He lives in Charlestown, Boston’s oldest and northernmost neighborhood, founded (as our church was) in 1630.

Margaret Moody: A  member of  First Church since 2001. Margaret helped to set up a phone tree outreach to members during 2020-21. Through the FCB Social Justice Committee Margaret found the issue of plastic and the environment and was able to be a key organizer for Climate Justice Learning Community programs. She is a member of the South Friendly and John Clarke committee, which distributes income from small church related restricted funds. A retired nurse, Margaret is a board member of Hale House, a residential care facility with ties to FCB. Other church related interests have been the Learning Community and the Caring Committee.

Nancy Olson: Nancy has been a member of First Church Boston since 2016, attending for several years before making the commitment to be a member. She was attracted by the comfortable atmosphere and thought-provoking sermons, often finding relevance to daily life. Nancy grew up in the Congregational Church tradition, the typical church on the green in a small New England town. As a member of FCB, she has been organizing volunteers for coffee hour refreshments, part of our welcoming tradition. She is on the Membership Committee and has also been pressed into service to help with the landscaping, satisfying her need to do a bit of gardening.  A Back Bay resident, she is happy to be able to walk to church.  Nancy retired from a career in Information Technology, including  many years spent as a Systems Analyst, communicating users’ needs to developers and trying to assure those needs were met.