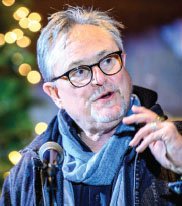 The Great Awakenings, the Cane Ridge Revival, Azusa Street.
Nowadays, millions in the United States and hundreds of millions in the larger world embrace charismatic movements, while liberal religious and post-Christian movements wither. Is “a great gulf fixed” between them, or might liberal traditions be missing something hidden in plain sight?

Attend in person or online. Register at no cost at www.MinnsLectures.org.

Modernism in the twentieth century decisively split Christianity into conservative and liberal camps. A century later, is a “common faith” even recognizable?

Lecture 2:  Stoicism/Epicureanism and the Way of All Flesh

The growing number of religiously unaffiliated has many religious leaders looking for ways to innovate even as ancient traditions gain in popularity.

Lecture 3:  The Path of Liberation

Our planet faces extinction. Where is the hope? Did the long-ago revivals at Azusa Street, which launched the global Pentecostal wave, hold the answer all along?